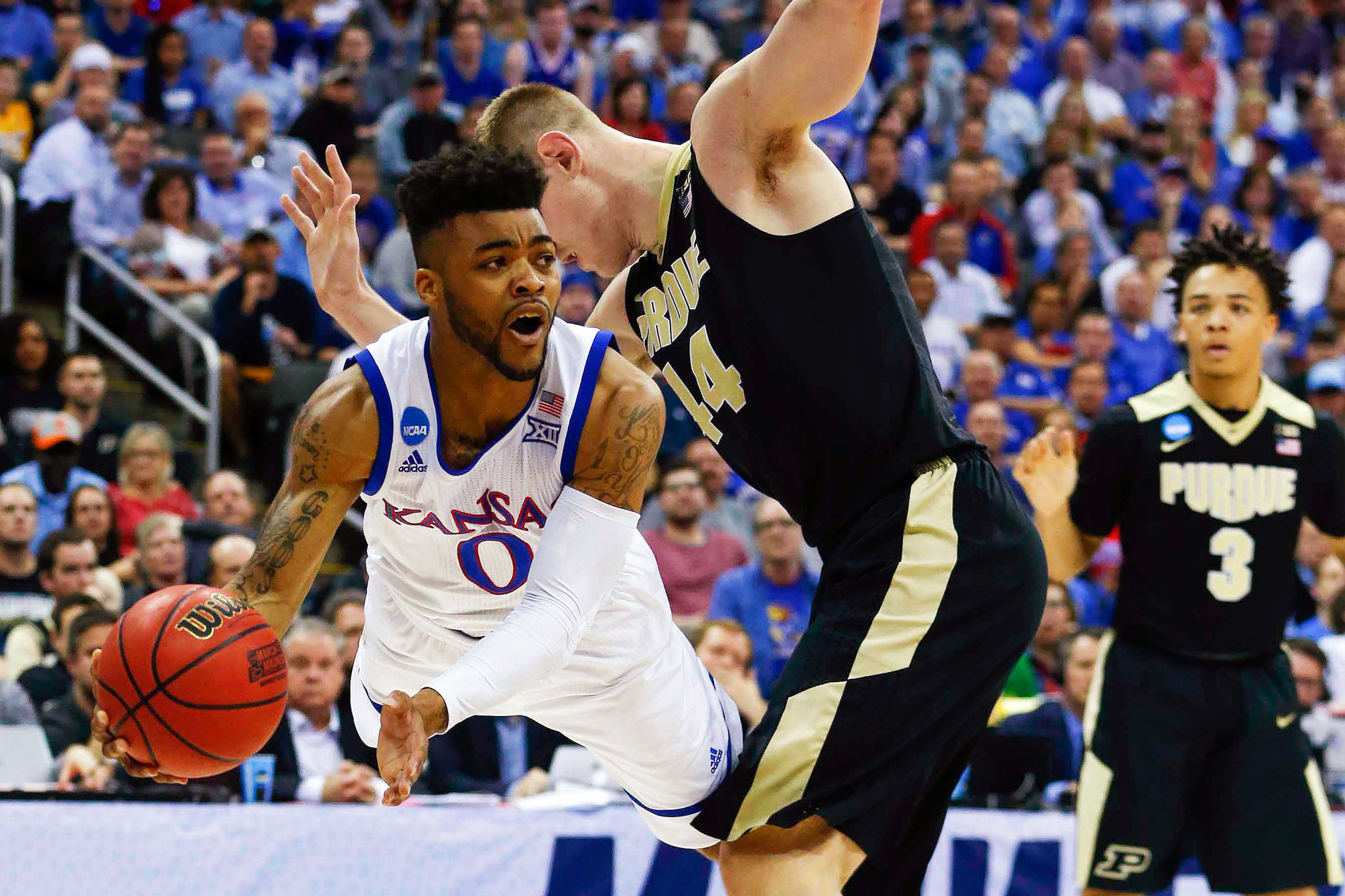 TOTABUANEWS.COM – A bit before the midway point of the second half on Thursday, the Kansas Jayhawks left Purdue in their wake. What had been a competitive Sweet 16 game between the two teams devolved into a blowout that had started to feel inevitable, and when the dust settled, Kansas’ victory margin was 32 points: 98-66.

Purdue is (or rather, was) a good team this season, the best one in the Big Ten. The Boilermakers have a legitimate National Player of the Year candidate in center Caleb Swanigan, who had a typically strong game. The score was 36-36 with about four minutes to play in the first half. The game had the look of being a game.

Kansas closed the first half on an 11-4 run, and it no longer looked like such a game anymore. But Purdue pushed back, and a Swanigan three-pointer with around 16:30 left made the score 53-51, Jayhawks. The game had the look of a game, again.

But the Boilermakers were chasing a train they’d never catch. Kansas responded with a 5-0 run to go back up by seven, then with a slow drip to make it a laugher. The Jayhawks’ points came from all over the court. Purdue ran out of responses.

Kansas’ box score is distributed so beautifully. Player of the Year candidate Frank Mason III is always a lead actor, but as usual, he got lots of help.

Everybody entrusted with shooting more than two times contributed in a big way. Only Carlton Bragg Jr., with a meaningless 0-of-2 night, was technically not helpful shooting the ball.

But seven of the eight Jayhawks to appear in Bill Self’s rotation on Thursday average at least five points per game on the season. They all have offensive ratings of at least 107, indicating they’re efficient. Even the ones who shoot the least often when they’re on the court — forward Sviatoslav Mykhailiuk and guard LaGerald Vick — can be primary scorers when needed.

Kansas doesn’t have a ton of depth in numbers. For a lot of the year, Self’s effectively had to use a seven-man rotation. The Jayhawks have never had a lot of depth in their frontcourt this year, and they’ve had less since 7-foot freshman Udoka Azubuike went out early in the season with a wrist injury. The perk of being Kansas is that the players who do play for this team are all elite talents, and they can all score.

Throw out a first-round win against 16th-seeded UC Davis, even though that one included 100 points. Let’s focus first on KU’s last two games: the routs against Michigan State and now Purdue.

Kansas’ average margin of victory against the Spartans and Boilers was 26 points. Its effective shooting percentage in those games? 59.4 and 66.9. Both of those are huge numbers, in a stat that factors in the added value of making three-pointers. (Kansas was 15-of-28 on those against Purdue.)

The Jayhawks have had other great runs this year. They won 18 in a row after a season-opening loss to Indiana in November. They’ve had other great two-game stretches; the best was back-to-back wins against Kentucky and Baylor as the calendar was flipping from January to February. It’s not like being good is new to them.

But the scale of their decimation of Michigan State and Purdue is fairly awing. One of those teams is coached by Tom Izzo. The other has Swanigan at center and had not lost a game by more than 12 points before KU beat it by almost three times that many.

Is a win of this magnitude against a team like Purdue the biggest win put upon a top-15-or so team all season? It’s got to be right up there.

Kansas has experience, but that won’t be what carries this team.

Self has a decent case as the best coach doing this right now. He’s now taken Kansas to the Elite Eight in seven of his 14 years on the job. He’s only gone 2-4 in his first six tries, but he’s well used to the stage now. So is the non-freshman nucleus of this team, which lost by a few hairs to eventual champion Villanova in a regional final last year.